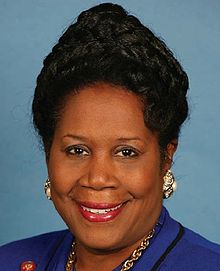 Representative Sheila Jackson Lee represents Texas Congressional District 18, encompassing most of inner Houston. She is a staunch supporter for the civil rights of minorities and women. Representative Jackson Lee also co-sponsored H.Res. 121 of 2007, also known as the “Comfort Women” Resolution.

Since first elected to the US Congress in 1995, Representative Jackson Lee is currently serving her 11th term. According to the 2010 Census, the 18th Congressional District of Texas is estimated to have 1,067 Korean Americans.

Mr. Speaker, I thank Congressman HONDA for hosting this very important Special Order this evening. Domestic violence is the leading cause of injury for women in America. More often than not, cases of violence against women go unreported. Over 80% of women who were victimized experienced significant short-term and long-term impacts related to the violence and were more likely to experience Post-Traumatic Stress Disorder and long-term chronic diseases such as asthma and diabetes. Every year in the United States, 1,000 to 1,600 women die at the hands of their male partners, often after a long, escalating pattern of battering. In 2009, 111 women were killed by their former or current husband, intimate partner or boyfriend in the State of Texas. Domestic violence is the leading cause of injury for women in America. Every nine seconds a woman in the United States is assaulted or beaten by stalkers or her partner. Another form of violence against women is sex trafficking. Trafficking ensnares millions of women and girls in modern-day slavery. According to the FBI, sex trafficking is the fastest-growing business of organized crime and the third-largest criminal enterprise in the world. More than 300,000 American children are at risk of becoming victims of sex trafficking annually in what is estimated to be a $9.8 billion industry. Women and girls represent 55 per cent of the estimated 20.9 million victims of forced labor worldwide and 98 per cent of the estimated 4.5 million forced into sexual exploitation. Similar to current sex trafficking crimes is the past atrocity of the crimes that were committed towards the Korean women. The ‘‘comfort women’’ system of forced military prostitution by the Government of Japan, considered unprecedented in its cruelty and magnitude, included gang rape, forced abortions, humiliation, and sexual violence resulting in mutilation, death, or eventual suicide in one of the largest cases of human trafficking in the 20th century. Today, there are now only just 59 known survivors that were comfort Korean victims. There are about 200,000 women are estimated to have worked as comfort women in Japan’s military brothels. Today, the comfort women issue remains taboo and controversial topic, just like other violent crimes committed to women. These women are not victims but also survivors, survivors from a brutal crime. The comfort women issue is not just about the past, but it is very relevant today. The world’s strength to oppose killing today is made greater by accountability, for actions present, but also past. It’s weakened by denial of accountability and obfuscation of past acts. History is a continuum that affects today and tomorrow. Women everywhere should not be victims of such an atrocity. It’s much harder to get tomorrow right if we get yesterday wrong. Today, we call on to the Japanese government to apologize to the few women who continue to live with the shame of the crimes committed against them.